After a few days in Buenos Aires and some in Mendoza drinking lovely wines we hit the road big time with an economy car and five days to go about 1,000 km to Salta province, up in the North West of Argentina. We were on our big Latin American adventure in between the NYC placement and a new life in Amsterdam. A lot of the travel forums suggested forgoing this journey for a bus or a flight straight to Salta but we were intrigued by the challenge of the Ruta 40, the main road running down the interior spine of Argentina, with all the tourist-free villages to stop off at and the open road to motor along.

Well, if you can call it a road (Ruta 40 pictured above). On particularly gravelly bits we really feared a puncture would leave us deserted – we rarely passed other cars on the road. Thankfully with a bit of luck and M’s careful driving, the tyres held out. Another problem was the signage. We had a road map but if we took a wrong turn it was often two hours before we realised and had to track back rather grumpily.

But still, the sense of achievement upon making it to a village (and sleep spot) each evening was enormous. After a long day driving around dried up valleys and arid landscapes, we’d know we were approaching a village as suddenly there would be a plush, green spot with tall trees as a kind of banner – “life exists here”. Plus, we got a much better idea of truly authentic Argentian life by staying in these little places, each with their own idiosyncracies and atmosphere. Ice-cream ruled in one village square, perfect hamburgers, the next, and one had more than its fair share of mad people. But in each place, the residents, young and old, families and gangs, they all congregated in the squares by night and stared at us with much more curiosity that we did them.

On one of the stops, there were three hotels in the village so we had chanced it and not booked a room. We arrived to find out there was a big wedding that night and two hotels were fully booked and at the other one, the owner was drunk as a lord and couldn’t really focus. We tried a couple of b&b’s, one really dirty, one with puppies being reared in the rooms and began to worry if we could make it to the next village to find somewhere. In the end we found a family to host us  via the tourist centre (amazingly the village had one). They promptly kicked two of their kids out of their bedroom for us. I think I remember my little bed had a great Boca Juniors cover.

And of course, the scenery was amazing. 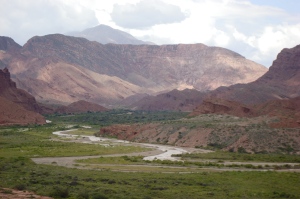