The Dutch masters and paintings of the Golden Age have always left me rather cold: portraits so sombre, domestic scenes so depressing, tonal landscapes so hazy, and as for the masterpiece, Rembrandt’s The Night Watch, ynaaah… Now Rubens et al are similarly Baroque era artists and you would think that I wouldn’t have been much inclined to have a look, but there you’d be wrong.

It had me at hello

I was immediately attracted to the promotional imagery (you’ll see the posters around town): naked blonde goddess draped around the neck of a young adonis – literally. And that’s the power of this show in a nutshell; it’s so much easier to make a connection with these paintings, to enjoy them.  From the facial expressions on the subjects, the consistent eye contact, playful subjects and poses, together with the proliferation of flowers, animals, produce: it’s utterly charming. At the press launch I think I was the last one to make it to the sumptuous lunch, dawdling amongst the landscapes on the top floor.

Given pride of place at the start of the exhibition,  The Union of Earth and Water made for a stunning beginning and its symbolism (the dependence of Antwerp on the River Scheldt) set the scene for the social and political backstory of the exhibition. I loved the casual seductiveness of the earth goddess; the meaningful look and the unembarrassed posture (reminds me of a friend of mine, I think she nabbed her future husband with a look like that in the hot tub).

There was further playfulness with Venus and Cupid, the former teasing the latter with some flowers, also notable for the inclusion of guinea pigs nestling gently at the foot of the painting – fertility symbols don’t you know?

Child portraits usually give me nightmares but de Vos captured the sweet innocence of his kids in a way that touched me, you can almost sense his fatherly pride.

The exhibition notes refer to an evident “joie de vivre” in many of the paintings selected, the use of food, flowers, hunting and animals, and this strikes a familiar note. How many times have I heard it said that Belgians and southern Hollanders (Limburgians, Brabantians) are distinguishable from the Dutch of the North for their greater emphasis on good living, fine foods and such? The fruits and game displays so lusciously painted here do tend to back that up.

Even the religious paintings of  Mary with the baby Jesus are more than once set within garlands of rich flowers, bringing to mind a kind of mexicana vibrancy.

Together with the lovely setting at the Hermitage, with green courtyard and bright and airy restaurant cafe for a cuppa afterwards, it’s something to be savoured, as the Flemish would.  Nb Do look out for the brilliant grumpy dog.

Rubens, Van Dyck and Jordaens: Flemish Painters from the Hermitage

I applied early to help at International Documentary Festival Amsterdam (IDFA) 2009 – another useful tip from my film tutor – and stated a preference for volunteering on the Press Desk.  As it happened there were, I think, nearly 50 applicants after these coveted places and only six volunteers would be needed. We had a rather surreal group interview to state why we thought we were better candidates than the others sitting next to us. Embarrassed as we were, a few of us were happy to talk ourselves up and I must have impressed as I made it to the final six. 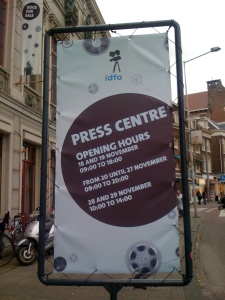 So for two weeks in November I racked up to Rokin to help run the pop-up Press Centre. We mostly spent our days welcoming international journalists, cooing over filmmakers and shooing away any walk-ins looking to use our free wi-fi (nb. the Dutch pronounce it wee-fee).

And of course I made it to a few films.

Soundtrack for a Revolution (US): How music and songs fortified the civil rights movement. Thoughtful use of archive footage and lovely looking talking heads. 9/10

Colony (Ireland): This beautiful film followed several great characters all involved in identifying and resolving threats to America’s bee colonies. The bee-keeping brothers from an intense religious family were especially endearing. “We need bees”, one brother’s simple statement, delights me whenever I think of it. 8/10

Monica & David (US): A little schmaltzy, which is just my thing. A cute couple, both with downs syndrome, get married and move apartment. The sharpness of their wit and bantering is enlightening, as are their ambitions and desires, but at the heart of it is a good old love story. 10/10 monicaanddavid.com

Iron Crows (South Korea): Beautifully shot documentary about workers on a ship scrapyard in Bangladesh. The film follows their dangerous work, literally following their bare-footed climb up the rusty hull of an old tanker. My absolute favourite of the festival. 10/10

Last Train Home (China): I  felt a lot of scenes had an unnatural feel and stiffness which affected my empathy for the subjects’ dire situation. This actually won the festival’s main prize, so what do I know? 6/10

The Yes Men Save the World (US): The funniest documentary of the festival. Two guys pulling audacious, topical pranks on corporate giants.  What they do takes a lot of nerve, and you can really see blind panic in their eyes sometimes. Or maybe just insanity? 8/10 theyesmenfixtheworld.com

A Hundred Patients of Dr Jia (China): A camera was set up at Dr Jia’s desk, facing the patient’s chair and basically just left recording for a year (obviously they had to change the tape once or twice). Great for an insight into the community life and banter of this busy clinic – the doctor smokes during consultations and patients jostle for his attention like playful kids. Simple but charming. 8/10

Crude (US): The story of an Ecuador village and its fight with a big US oil company for compensation after heavy pollution. Fascinating moments of slimy, corporate wriggling contrasted with poor but determined villagers who believe that with truth on their side they will prevail. 8/10 www.crudethemovie.com 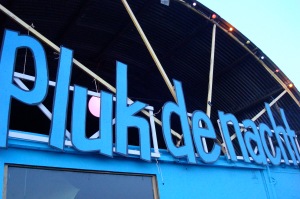 Getting into film this summer. Attended a six-week course on becoming a film critic, not amazingly edifying but I did get a few good tips. Our tutor gave us a heads up to see Autumn Ball, the opening film of the Pluk de Nacht outdoor film festival, which, I duly did (see review below).

Temporarliy set up on some wasteland in the NW of Amsterdam, Pluk de Nacht (Seize the Night), seemed a wonderland of industrial, retro colour and ambience from the moment I approached it’s tubular entrance arch. On my own and incredibly early in order to get a seat, I bagged a soft space on some old, velvet nightclub couch of some kind and asked some merry folk nearby to guard it while I joined the huge queue for a beer. Didn’t last long as I spotted a deserted stall selling G&T’s or the like, obviously too fancy for this crowd, but just the thing for an impatient English girl sick to death of Heineken. Sitting down to drink and pretend to read my book in the dying light of the day, I took in the sights and smells of the Pluk de Nacht.

Well the smells were basically hashish mixed with some fresh estuary air, I inhaled a good amount of both happily enough. It was strong stuff. Passing industrial ships wafted down the Ij from the North Sea and a few picnic-ers perched precariously on the very edge of the Westerdoksdijk, calm as you like. Those daring Dutch.

Containers piled up in a wall made for the backdrop to the cinema screen, deckchairs all around. Another container dump housed the projector and some busy techies. A few large utility vehicles were parked up to double as extra-cool VIP viewing areas and a VW camper van at the back seemed to attract the coolest cool kids. What had obviously been a barren, ugly car park of a place had been defiantly beautified and the vibrant crowd seemed to lounge around as if in their own boudoir garage. 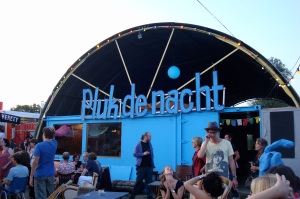 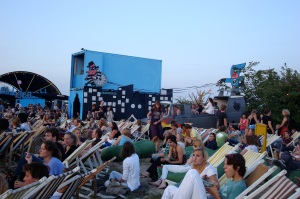 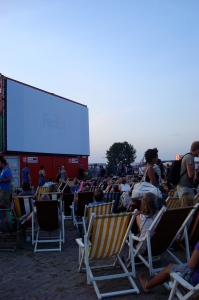 My review for Autumn Ball: (Sügisball)

Depicting life in and around a grim, high-rise housing development, an area called Lasnamäe, on the edge of Estonia’s capital, this film is a collage of characters suffering the effects of urban alienation. Mati, a cuckolded writer, fluctuates between quiet despair and aggression. A promiscuous doorman, Theo, shows some aspiration but can’t seem to escape mediocracy. Laura frets over her daughter’s well-being and limits her guilty pleasures to escapist TV and a daytime tipple. An architect’s wife struggles with her pretentious husband’s disdain, whilst an old barber is simply bored and lonely. That’s all the plot you need as there is little interaction going on at all, that’s the point, but most of the key characters do end up having an outburst of some kind that shakes them up. Several also endure the judgement of others, say from buying porn at the supermarket, or friendly behaviour taken for paedophilia. Instead of showing defiance, most of them meekly accept their shame, Theo excluded.

There are glimpses of a sparkling, confident side of the city but that contrast with life in isolated Lasnamäe is not played upon much, and nor are the politics of the region. Also, the restrained use of dialogue gives rein to a pervading score which soothes the appetite for words and puts the focus on the confined movements of each character. The settings themselves often take centre stage and the enigmatic landscapes, such as desolate roads and a soulless factory, are all expertly shot. Autumn Ball’s director surprisingly labels it a black comedy and there are certainly some oddly laughable moments, when Mati is caught spying on his wife, for one, but they are rare. Though for anyone who truly loathes romantic comedies, you might get some sick gratification from Theo’s violent response to the genre at the end of the film.