This article was so popular it was shared by three separate publishers (ACCESS Magazine, Dutchnews.nl and The Holland Times).

For a few years now I’ve been making ‘SLOW TV’ for the local television broadcaster, Salto (salto.nl). These are short, 1 or 2-minute videos of nothing much happening, no narrative, no voiceovers, but something pleasant to watch, set to some ambient music.

With thanks to We Are Ok for the ambient music tracks.

Here’s one I wrote earlier …

Readers loved this one, I think because it made them feel all warm and fuzzy inside.

Here’s an update on this music review of Zitakula I wrote for The Holland Times (March 2017 ed): their Paradiso concert is sold out! 🎺🥁🎷🎹🎸🎤

With two EPs under their belt, this Amsterdam afrobeats band is now just about to release their debut full length album and they are throwing a party at the Paradiso to celebrate. On 20 April, concertgoers will no doubt fill out the venue’s Kleine Zaal (small hall) with a whole night of bouncing, jumping, swaying, rocking, twerking and whatever other dance moves the kids do these days. As the respected 3voor12 says: “Standing still is not an option with Zitakula”.
Their music is a mix of afrofunk, soul and more, which takes a hardcore of eight musicians to create, including two sax players (tenor and alto), a trumpet player and lots of percussion. Actually, it seems like pretty much the whole band contributes to the percussion. With influences including Fela Kuti, and Ebo Taylor, but with a sound very much their own, Zitakula bring a confident swagger that belies their young years. Perhaps it’s because they are having so much fun – guitarist Camiel van Zilfhout in particular is great fun to observe on stage. One of their first recorded tracks, Polyrhytmo, has an uplifting riff that you still look forward to even after 100 plays. Sadly, their charismatic lead vocalist Joey Skeete Mcleed had to quit the band in 2016 but they managed a gradual transition to suit the big new voice of Sandy Miessi Bakomi. With her Congolese roots she has fitted right in while adding a bit of a soul booster-jab, as you can see in the music video for Plenty of Fish. [see below]
In just a few years Zitakula has already amassed a loyal following; gaining local fans from energetic gigs at places such as Noorderslag, the Oerol festival on Terschelling island, as well as a TV appearance on De Wereld Draait Door. And they certainly appreciate that loyal following … this year’s debut album has been successfully crowdfunded to the tune of €12,665 (they only asked for €8,000). The realities of an eight-piece independent music act is that there’s not much money to go around but it is testament to their infectious passion that they are making it work. For readers who would appreciate the good vibes of a Zitakula gig – make a date in your diary. But if you can’t make it, the new album will be available as a digital download, CD and vinyl so you can make a party of your own at home.

The Dutch masters and paintings of the Golden Age have always left me rather cold: portraits so sombre, domestic scenes so depressing, tonal landscapes so hazy, and as for the masterpiece, Rembrandt’s The Night Watch, ynaaah… Now Rubens et al are similarly Baroque era artists and you would think that I wouldn’t have been much inclined to have a look, but there you’d be wrong.

It had me at hello

I was immediately attracted to the promotional imagery (you’ll see the posters around town): naked blonde goddess draped around the neck of a young adonis – literally. And that’s the power of this show in a nutshell; it’s so much easier to make a connection with these paintings, to enjoy them.  From the facial expressions on the subjects, the consistent eye contact, playful subjects and poses, together with the proliferation of flowers, animals, produce: it’s utterly charming. At the press launch I think I was the last one to make it to the sumptuous lunch, dawdling amongst the landscapes on the top floor.

Given pride of place at the start of the exhibition,  The Union of Earth and Water made for a stunning beginning and its symbolism (the dependence of Antwerp on the River Scheldt) set the scene for the social and political backstory of the exhibition. I loved the casual seductiveness of the earth goddess; the meaningful look and the unembarrassed posture (reminds me of a friend of mine, I think she nabbed her future husband with a look like that in the hot tub).

There was further playfulness with Venus and Cupid, the former teasing the latter with some flowers, also notable for the inclusion of guinea pigs nestling gently at the foot of the painting – fertility symbols don’t you know?

Child portraits usually give me nightmares but de Vos captured the sweet innocence of his kids in a way that touched me, you can almost sense his fatherly pride.

The exhibition notes refer to an evident “joie de vivre” in many of the paintings selected, the use of food, flowers, hunting and animals, and this strikes a familiar note. How many times have I heard it said that Belgians and southern Hollanders (Limburgians, Brabantians) are distinguishable from the Dutch of the North for their greater emphasis on good living, fine foods and such? The fruits and game displays so lusciously painted here do tend to back that up.

Even the religious paintings of  Mary with the baby Jesus are more than once set within garlands of rich flowers, bringing to mind a kind of mexicana vibrancy.

Together with the lovely setting at the Hermitage, with green courtyard and bright and airy restaurant cafe for a cuppa afterwards, it’s something to be savoured, as the Flemish would.  Nb Do look out for the brilliant grumpy dog.

Rubens, Van Dyck and Jordaens: Flemish Painters from the Hermitage

Here’s what I’ve been working on since October. Published 3 December 2010

My father was born and raised in Hong Kong, and although he left us when we were quite young and never much spoke to us (least of all about his homeland), I wondered whether I would sense his connection to the place.

I could have sat for hours watching the boats and activity out of our hotel window. It’s really so easy to see how the territory’s natural geography made such a good location for a trading post way back when… The modern city is also captivating, and from Kowloon on the mainland, the skyline at night is more stunning even than Manhattan; the colours, spread and combinations, adding another dimension (though perhaps some might say it’s on the gaudy side). Out on the streets there seemed to be an awful lot of well-dressed office workers; the women particularly smart and assured – protected from the heat under very civilised covered walkways. Perhaps that was the only reminder of dad; he always was a snappy dresser.

Ever one for a bargain, before we left I insisted on queuing for two and a half hours to go to the tiny dim sum canteen, Tim Ho Wan, which had recently become the world’s cheapest michelin-starred restaurant (see video from The Guardian). I should have known better. Chinese food is  delicious and flavourful but to be honest not that difficult to execute. A master chef’s sui mai, then, aren’t going to be that much more wonderful than a regular chef’s. So yes, the dumplings and other little dishes were tasty but not the amazing dishes you might be anticipating after a good stint sat on the pavement. And we should know, we ordered everything on the menu.

See more of our Hong Kong photos on Flickr >>

The painter, Raoul Dufy, was what they call a French Fauvist. My mother and I are quite keen on his colourful palettes and charming scenes – not at all fashionable or deep but just lovely to look at, really (at home we had a print of The Harvest above our dining table for years). Well, on a fine, spring Sunday  down at Morley Collge, SE1, we had a go ourselves. Mum brought along her private collection of Dufy stuff: a book, wrapping paper, various postcards, (the book especially got some envious looks as it’s now out of print), and so, suitably inspired we turned to our still life subject matter. 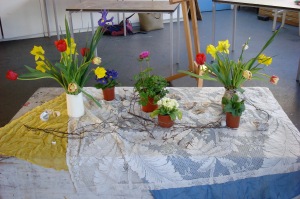 We splurged right in and started painting a part of the arrangement. Our efforts were, of course, pretty dreadful.

The tutor duly did her stuff for the next few hours and instructed us in the ways of the watercolourist. We got tips on colour mixing and for testing out your palette on a spare strip of paper, several different brush techniques and ways to mix materials (coloured pencil and wax).

To help us with our composition, we tried a few exercises with just a coloured pencil. We tried sketching what we saw using our non-writing hand, and then we stood so that we could not see the drawing board itself as we drew, but only the flower arrangements we were representing. Both liberating and challenging.

If you look the final achievements of the class I think we made remarkable progress throughout the day: 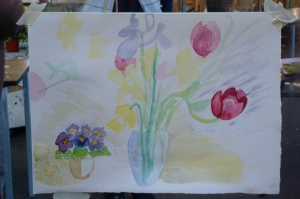